StreetPassers! Join us on the night of March 2nd as we celebrate the release of the Nintendo Switch, Legend of Zelda: Breath of the Wild, 1-2 Switch and Super Bomberman with an awesome Midnight Launch Party at the GameStop located on 3rd Ave. in Chula Vista. While we wait for the all the releases we'll be hosting a small Bomberman'94 tournament [Keep an eye out for upcoming details]. There will be also snacks, raffles and giveaways! As usual, don't forget to bring your 3DS fo

Another spooky National StreetPass Weekend is coming up just in time for Halloween! Stop by any of the more than 29,000 Nintendo Zone hotspots across North America with your Nintendo 3DS system from Oct. 28 through 31st—you could get up to six StreetPass tags from across the world. Wondering which games have StreetPass features? Nintendo recommends a few to get you started: Disney Magical World 2 Free Halloween-themed items are now available on the official website [http://di

Another StreetPass Weekend has arrived to celebrate the latest StreetPass Mii Plaza update and games. Starting today through September 5th, bring your Nintendo 3DS to a hotspot near you to collect StreetPass tags. Also, don't forget to download your free game! You can pick between Slot Car Rivals or Market Crashers. There's also 3 more games that you can get for $2.99 each or a bundle of four games for $8.99. To make sure you get the update, go into the StreetPass Mii Plaza

Big news, StreetPassers! Nintendo of America announced during this morning's Nintendo Direct that StreetPass Mii Plaza is getting a Premium update and five new games today. Mii Plaza will speed up functionality and increase the number of players you can meet from 10 to 100 Miis. That's a huge improvement for us, since it will be much easier to get StreetPass tags without being worried about clearing out Mii visitors with frequency in order to greet new ones at our Miit-ups or

One of the big surprises this morning during the Nintendo Direct streaming was the reveal of Super Mario Maker coming to Nintendo 3DS. The portable version of the Wii U game players will be able to share their Mario creations via local wireless and StreetPass, but players won't be able to upload them to the internet for others to play. Nintendo says that Super Mario Maker for Nintendo 3DS will support levels originally created on Wii U, though the company warned that not all

A Marriage Proposal Via StreetPass

StreetPassers, we've seen everything! A StreetPasser in UK, Andrew Hannay, used his 3DS to surprise his girlfriend asking for her hand in marriage via StreetPass. Fortunately for Hannay, she said yes! Source / Via #StreetPass #Marriage #Proposal #UK #Nintendo #3DS #MiiPlaza 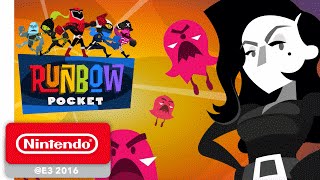 After 13 AM denied the leaked on Amazon, Nintendo finally released the official trailer announcing Runbow Pocket coming to 3DS later this year. Based on the chaotic multiplayer for Wii U, this new version of the game will also contain Master Adventure, Bowhemoth, and Satura’s Space Adventure on your own, or play head to head with friends over local ad hoc networking. And of course there will be a StreetPass function, where Players can also create cards to share fun stats with

StreetPassers, get ready to celebrate E3 with a National StreetPass Week! Expect a visit from Reggie and don't forget to bring your Nintendo 3DS to a Nintendo Zone location from June 10th to June 19th to collect up to six StreetPass tags from around North America. To find a Nintendo Zone hotspot near you go here: http://www.nintendo.com/3ds/nintendozone. Source: Nintendo #StreetPass #StreetPassSanDiego #NationalStreetPassWeek #E32016 #E3 #Nintendo #TheLegendofZelda #Nintendo3